Ecole Chocolat / Lesson—How Chocolate is Made 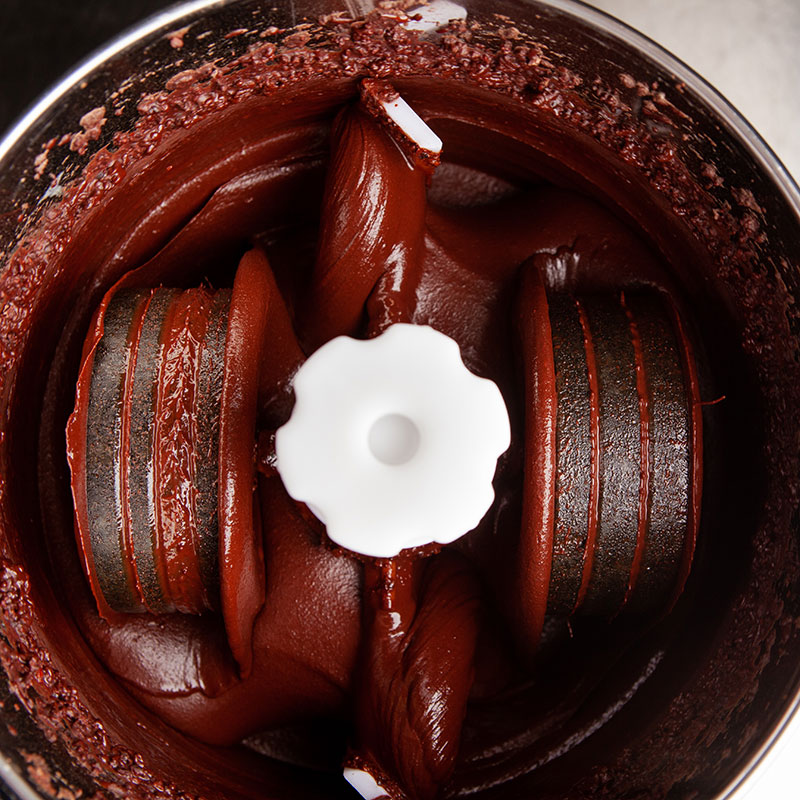 A short overview of how chocolate is made from bean to bar. Each step in the process is crucial to entice the best flavor from the bean.

Chocolate processing practices haven’t changed much from the time of the Maya; it is just that the equipment and processes have been refined.

These processes can be divided into two phases:

In the Cacao Field 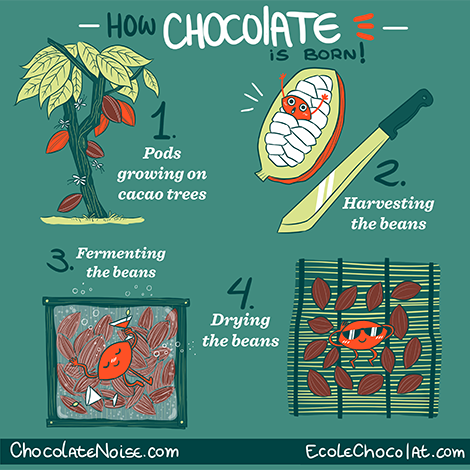 Cacao trees produce buds on a continuous basis—this can be year-round in subtropical areas, such as Central America or it can be tied to the rain cycle, as it is in Africa. Fluctuations in growth cycle and harvest can occur because of changes in climate conditions.

Harvesting the cacao pods is still done by hand, as the mature pods need to be identified and cut from the tree, without damaging flower buds, immature pods or the stem area from which the bud grows.

The pods are carefully broken open to release the cacao beans, which are embedded in a moist, fibrous, white pulp. The beans and pulp are scooped out quickly and either heaped in a pile on mats or banana leaves and covered, or put into a bin or box with a lid.

Fermentation occurs when the pulp surrounding the cacao bean is converted into alcohol by the yeasts present in the air and the heat generated by the pile or box. The beans are mixed gently during this process to introduce oxygen into the pile or box, which turns the alcohol into lactic and acetic acid. Slits or holes in the box allow the resulting liquid with its alcohol content to slowly leak out of the pile of beans during the fermentation process, leaving just the beans.

Germination in the cacao bean is killed by the high temperatures produced during the fermentation process. The beans gather moisture from the environment and plump. Their flavor begins to change from mainly bitter to the beginnings of the complex flavor called chocolate.

The fermentation process can take up to eight days, depending on the species of cacao bean and the climate temperature of the growing region. Better fermentation results in better flavor and requires less roasting time to bring out that flavor.

The cocoa beans, as they are now called after fermentation, come out of this process with a high moisture content. In order to be shipped or stored, they must be dried.

The drying process differs, depending on the climate or size of the plantation. Cocoa beans can be dried out in the sun on trays or mats where the climate permits. Sun-drying usually happens in smaller plantations in drier environments. In tropical areas, where daily rainfall is the norm, the beans can be dried in sheds, as long as there is enough air circulating around the flats of beans. The use of wood fire to speed the drying process is disliked by bulk chocolate manufacturers and chocolatiers, as the process leaves the beans with a smoky taste.

Once the moisture percentage in the cocoa beans has reached 6 to 7 percent, they are sorted and bagged. The sorting process is very important because the cocoa beans are classified and sold in the industry by their size and quality. The bagged cocoa beans are then loaded on ships to be delivered to chocolate manufacturers.

In the Manufacturing Plant 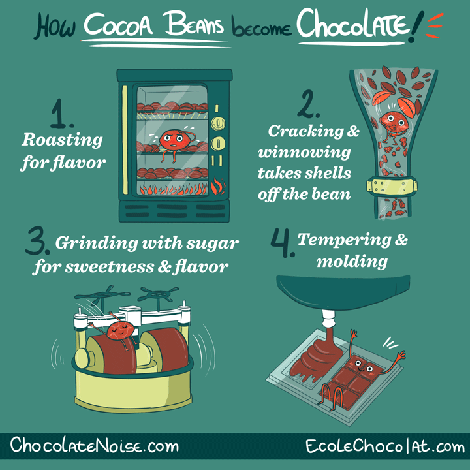 Each chocolate manufacturer has a closely guarded “secret recipe” for each chocolate product that it produces. This secret begins with the type and quality of the cocoa beans used. I will use the symbol: § to indicate points in the process where the manufacturer may use their own secret formula.

When the selected § cocoa beans arrive at the manufacturing plant they go through a very extensive sampling and testing procedure. Sample cocoa beans are tested for size and defects, such as insects or mold, and then ground into unsweetened chocolate, which is evaluated for flavor and aroma by company tasters. Once the testing is complete and the shipment is accepted by the manufacturer, the beans are thoroughly cleaned to remove any foreign matter. The cocoa beans then go into the roaster for anywhere from § 10 to 35 minutes.

Cracking (or Fanning) and Grinding

While roasting, the shell of the cocoa bean separates from the bean kernel and is removed in the first step of the cracking or fanning process. The beans are cracked (not crushed) by being passed through serrated cones. The cracked beans are now called cocoa nibs.

As the shell is dry and lightweight, it can be winnowed from the cocoa nib. Winnowing is done by exposure to a current of air, so that the shells are blown free of the heavier nibs. The shells can be recycled for mulch and other non-edible products. The nibs contain approximately 50 percent cocoa butter, depending on the cacao species. 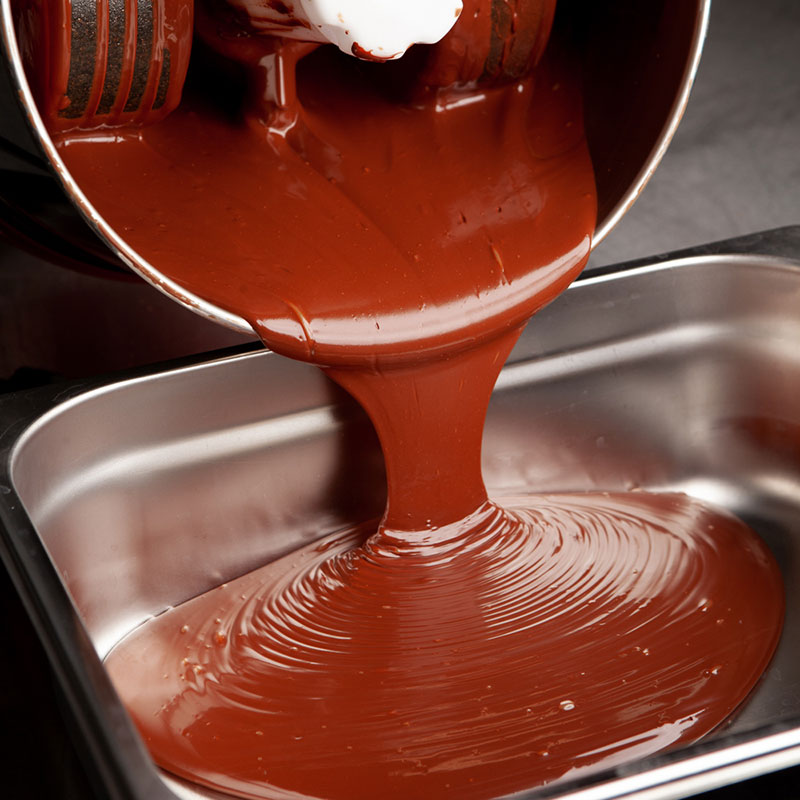 The first grind of the beans is usually done in a milling or grinding machine such as a melangeur. The nibs are ground or crushed to liquefy the cocoa butter and produce what is now called chocolate liquor or chocolate liquid.

For the second refining process, most chocolate manufacturers use a roll refiner or ball mill, which has two functions: to further reduce the particle size of the cocoa mass (and any other ingredients, such as sugar or milk powder) and to distribute the cocoa butter evenly throughout the mass, coating all the particles.

The rolling process itself creates heat that melts and distributes the cocoa butter. As well as the flavor of the chocolate, manufacturers must decide on the § particle size for each of their chocolates. This is the first step to developing chocolate’s smooth and creamy mouth-feel.

This process develops the flavor of the chocolate, releasing some of the inherent bitterness and gives the resulting chocolate its smooth, melt-in-your-mouth quality. The conch machine has rollers or paddles that continuously knead the chocolate over a § period of hours or days depending on the flavor and texture desired by the manufacturer.

For the last two steps in the chocolate process, the conched chocolate mass is tempered and molded into bulk bars (or wafers) or it may go into another production cycle to produce specialized retail products, such as coated-candy centers and molded items.