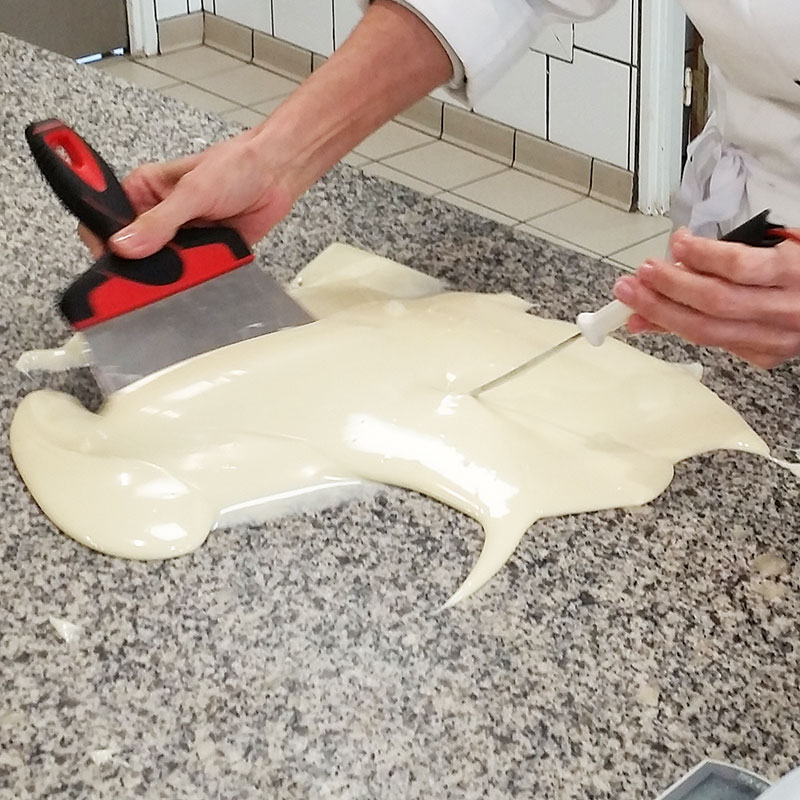 Tempering is like organizing individual dancers at a party into a Conga line. In chocolate tempering, temperature and motion are the party organizers that bring all the individual dancing crystals of fatty acids together in long lines and, in the process, create a stable crystallization throughout the chocolate mass.

In the tempering process, melted chocolate is first cooled, causing the fatty acid crystals to form nuclei around which the other fatty acids will crystallize. Once the crystals connect, the temperature is then raised to keep them from solidifying.

How to Temper Chocolate

"Tempering by Seeding" is the easiest and quickest way to temper chocolate.

Ready to start? You will need: Microwave (or double boiler), microwave-safe bowl, spatula for stirring and a good thermometer that has a range as low as 70° F (21° C).

I suggest you have at least 24 ounces (680 grams) of chocolate when you start to temper. I know it sounds like a lot, and a big monetary commitment, but this amount gives you enough to work with when you are dipping or molding.

Also, it is much easier to control temperatures and not overheat when you have a mass of chocolate. You can re-temper or reuse any of the chocolate you have left over, so the extra won’t be wasted. At my former shop, "au Chocolat," we sold our bulk chocolate in one-pound (454 g) round bars so I could easily show that a one-pound (16 oz.) puddle of melted chocolate only came up about an inch in the bowl. That is not a lot of chocolate mass in which to dip something.

Step 1. You need to heat the chocolate to melt all fatty acid crystals.

Chop the chocolate into small pieces. The smaller the pieces, the quicker your chocolate will melt and temper. Set aside about 25 to 30 percent of the chocolate. There is no need to be exact on this measurement, as you just want enough unmelted, tempered chocolate to start the seeding process.

Place the remaining 70 to 75 percent of chopped chocolate in a microwave-safe bowl and microwave on half-power, being very careful to stir the mixture every minute until it is almost completely melted, which should take about four to five minutes.

Remove the bowl of chocolate from the microwave and stir to cool it slightly. Removing the bowl before all the chocolate is completely melted will help prevent over heating. You don’t want your chocolate to burn. Those last bits of solid chocolate will melt as you stir. Using a thermometer, check the temperature of the melted chocolate—it should be between:

I’ve indicated a range of temperatures above as not all thermometers are perfectly accurate.

Step 2. Add the seed chocolate you have set aside.

Start adding handfuls of the grated chocolate you set aside to the melted chocolate. Stir in the seeding chocolate bits continuously until the desired temperature (see below) is reached and the bits have dissolved completely. This could take anywhere from 10 to 15 minutes, depending on the temperature of your environment. Your chocolate should now be tempered.

A heating pad put around the bottom and sides of the bowl will help if you are doing a lot of work at one time. Again, make sure the heating pad doesn’t raise the temperature of the chocolate too high. Keep stirring and checking the chocolate mass with a thermometer.

Want to become an expert in tempering chocolate in order to create beautiful chocolate bonbons, confections and bars? Check out our online program: PROFESSIONAL CHOCOLATIER

This is when your melted chocolate mass becomes a paste that is grainy, dull, and thick. There are two conditions that bring about chocolate seize:

Chocolate is made up of dry ingredients (cocoa solids, sugar, and possibly milk powder) suspended in cocoa butter. A small drop of liquid will moisten the dry ingredients and allow the cocoa solids to clump together and separate from the cocoa butter. Remember the old saying that oil and water don't mix? This is why you never cover a pot of chocolate with a lid (because the steam will condense and drop into the chocolate) and why you need to be very careful when using a double boiler. If this happens, the chocolate will not temper, but it doesn’t have to go to waste; it can be used in baking or truffle centers.

Interestingly, if you add in more liquid to the chocolate (a minimum of one tablespoon of liquid per ounce of chocolate), the melted chocolate will remain in a liquid state because the dry particles get saturated by the moisture and detach from each other. They then are suspended in the liquid again so the chocolate mass is back to a liquid form. You'll find this technique used to make chocolate sauces and syrups or for flavoring cakes and pastries.

Overheating separates the cocoa solids and other dry ingredients from the cocoa butter. Chocolate solids and dry ingredients will burn if heated to 130 degrees. The result is a dry, discolored paste. There’s no retrieving burnt chocolate, so be very careful when heating in a double boiler or microwave.

The Art of Dipping Chocolate Bonbons

Looking for chocolate to practice your tempering? Check out our list of Gourmet Chocolate Suppliers

Get reminders about upcoming classes! To receive program updates and news, click on the following button.

SIGN ME UP!
UnderstoodThis site uses cookies to help maintain session persistence and language preferences. Services such as Google also place cookies here to help us improve your experience by providing insights into how the site is being used. Visit our Privacy Policy page to learn more about the cookies found on this site.
Add a Home Screen shortcut to launch like a native app?