What is cocoa percentage in chocolate?

What is cocoa percentage in chocolate? 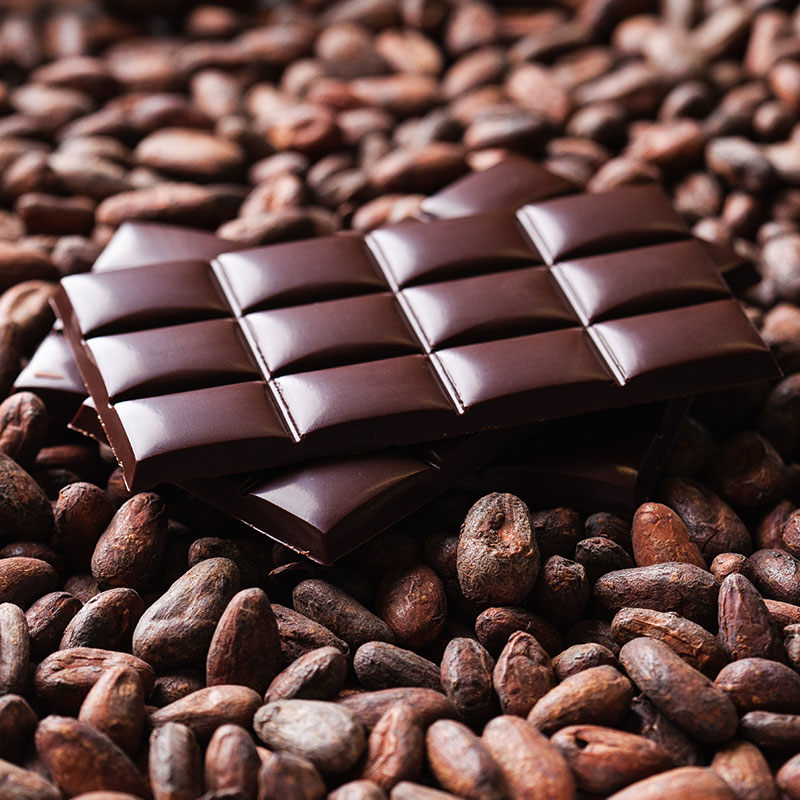 Chocolate can come in a variety of flavors, which contain the following ingredients and are categorized by the industry as:

As you can see from the categories above, chocolate flavor starts with the cocoa bean itself (the ground bean is usually referred to as chocolate liquor in the industry), represented by its two parts: the solid particles and fat, i.e. cocoa butter. The highest percentage of cocoa bean content is obviously in the Unsweetened category—but not many of us can really enjoy a hunk of unsweetened chocolate.

As we move down the page from that category, the cocoa percentage decreases as the sugar increases (along with the percentage of milk products in milk and white chocolate). And there are many different percentage content steps in between the major categories.

But don't just assume that a high cocoa content bar will taste better than a low percentage bar. Chocolate flavor preferences, like wine, vary with each of our palates. Also percentage doesn't let you know if the beans themselves were of good quality and whether they were processed correctly to bring out the beautiful flavor notes. Fermentation, drying and roasting are as important as the beans themselves in producing a great flavor. 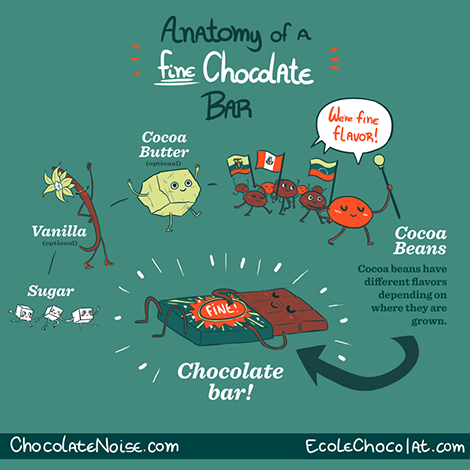 These are dark chocolates whose origins are usually specific to a region or plantation and/or carefully blended from beans from different regions. Flavor quality depend upon the inherent flavor of the cocoa beans, the terroir in which the cacao trees are grown and the cocoa beans' processing by the chocolate maker.

To understand chocolate flavor, you need to understand the different types of Theobroma cacao. The Mothers of true cacao originated in South America then spread through out Meso America by the indigenous peoples. Geographic and Genetic Population Differentiation of the Amazonian Chocolate Tree – is a very important study of cacao types. The main conclusions are: "The results presented here lead us to propose a new classification of cacao germplasm into 10 major clusters, or groups: Marañon, Curaray, Criollo, Iquitos, Nanay, Contamana, Amelonado, Purús, Nacional and Guiana. This new classification, which now numbers 14, reflects more accurately the genetic diversity now available for breeders, rather than the traditional classification as Criollo, Forastero or Trinitario." Over the centuries the types of cacao have been mixed and mingled so that origins are sometimes hard to discern, and the differences in flavor can vary from one plantation to another, even though the type is the same.

With all these flavor differences between types, as well as differences within the type itself, depending on growing conditions and region, chocolate manufacturers and craft chocolate makers can make the flavor of their chocolate products unique by using different cocoa beans that have been fermented and dried to their specifications. Here is an overview of the general types you'll find most often listed on a chocolate bar or box of bonbons.

The forestero (“of the forest”) cacao type originated from the Amazon basin. While the forestero cacao bean itself had a more bitter and acidic flavor, it was a very hardy plant and produced many more fruit pods. The amelonado was originally a Lower Amazon forestero type that was cultivated in Bahia and the Caribbean islands. Because of its hardiness, this forestero type cacao then made its way to West Africa. The amelonado has a mellow flavor that is perfect for milk chocolate. Because of those attributes, the forestero/amelonado grew in popularity with farmers over the centuries to account for approximately 92 percent of the world’s cocoa production today.

The trinitario (“native of Trinidad”) cacao type was born after disease devastated the criollo cacao plantations in Trinidad in the 1700s. After the disease had passed, plantations decided to reestablish their business by importing forestero stock from Venezuela. The new stock crossed with the few remaining criollo trees. The hybrid that developed combined the hardiness of the forestero with the full flavor of the criollo. The trinitario type accounts for approximately 5 percent of the world’s cocoa production.

The nacional type is a forastero hybrid cross that surfaced in Ecuador with unknown origins – until 2011 when Marañón Chocolate discovered pure nacional cacao in Peru. It has a robust sweet and fruity flavor that is easy to identify and accounts for approximately 2 percent of the world's cocoa production.

The criollo (pronounced kree’owlow) originated from from northern South America into Central America. Its name means “native birth" and if processed correctly, as it has low acid levels and produces a complex, full-flavored chocolate. Unfortunately, the criollo is the most difficult cacao tree to grow, so this type accounts for less than one percent of the world’s cocoa production. Also it is hard to find, as breeding and cross pollination has further diluted the type over time. Pockets of pure criollo have been discovered by accident. For example, at the BFREE Demonstration Cacao Farm, Belize.

How Chocolate is Made