Shipping Chocolate Part 2: The continuing story of Carl the Snowman 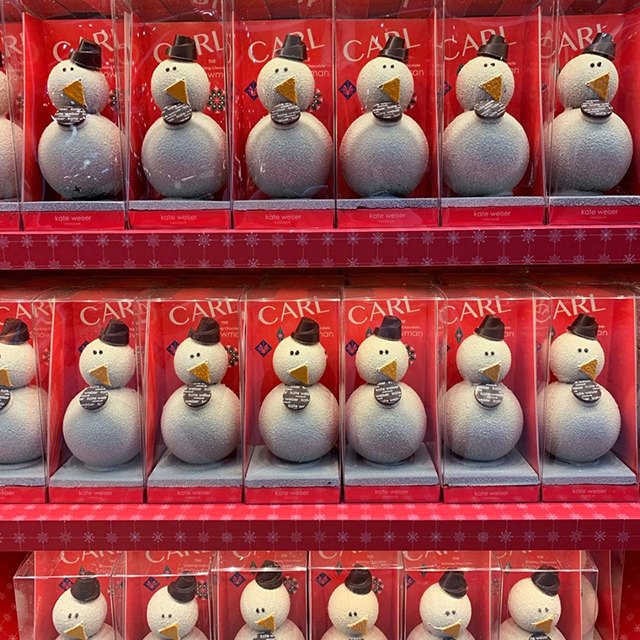 Today is November 1st, and also the day that you can buy Carl the Snowman (also known as the original hot chocolate bomb) for the 2019 holiday season! If you haven't heard of Carl before, he is the brainchild of Kate Weiser of Kate Weiser Chocolate. He's a chocolate snowman with a belly full of drinking chocolate mix and marshmallows. He even has his own Instagram account, but he gets lots of attention on Kate's Instagram account too!

As I'm sure you can imagine, shipping Carl is no easy task. In February of 2017, Kate wrote a blog post for us about the challenges of packaging and shipping Carl. If you missed that blog post, you can read it here.

In 2018, Carl the Snowman was included in Oprah's Favorite Things List. This was no surprise to us, since he's just so darn cute and the perfect gift.

We asked Kate if she would write a blog post about how changes in producing and shipping Carl, the Oprah phenomenon and what is in store for Carl's 2019 holiday season. As usual, Kate was happy to share her knowledge, and gave us a wealth of information about all that she's learned.

1) Has the process for making Carl changed?

The process for actually making Carl has drastically changed this year. We purchased equipment at the tail end of last year that we are all super excited to use in Carl production for the first time. One is a mold spinning machine with custom Carl the Snowman spinner molds that attach to this machine via magnets. This machine has revolutionized the process - making 8 complete snowmen at one time instead of making half a snowman by hand one by one and gluing them together later. Overall it was a $35,000 investment. See the machine on Kate's Instagram.

We also got a machine that pokes a hole in the underside of Carl so we can fill him up with cocoa mix and marshmallows via funnel. Then we plug the hole with a custom square piece that Carl sits on. Doing it this way has removed all the weakness from the exterior seam so he is much, much more durable and protected during shipping. Overall the efficiency created with this new system takes us from 6 months worth of labor to make Carl down to just 9 weeks to make the same quantity. It's pretty incredible.

Being able to make Carl the Snowman so quickly does present new challenges, however. There's no time to slowly order ingredients on an as needed basis. Now we have to buy all Carl's ingredients upfront - that's 14,000 lbs of chocolate I gotta figure out where to put. 200 cases of mini marshmallows, 200 cases of white chocolate, 75 kg of white and orange colored cocoa butter - all of that needs to go somewhere. It's also tough on cash flow since those purchases have to be made in the 3rd quarter which is typically my slowest performing quarter. But the reality is that buying this much at one time lowers my unit costs (sometimes by half) so it will all be worth the inconvenience now once they start moving in the holiday season.

2) Has Carl's packaging changed this year?

We recently gave Carl's box a major upgrade. My partnership with Neiman Marcus last year was so successful that I was inspired to make the additional investment. Neiman's tripled their order this year and I wanted to make sure the packaging matched the quality of the brand. The new box adds additional protection during shipping and is now so much more beautiful on the shelf. I sprung for the professional graphic designer instead of DIY and it was well worth it. Since Carl the Snowman has become my "brand ambassador" it was important that his packaging look the part too. The down side? This type of box is made in China - that means super long lead times and high tariffs on freight to get them over here. My boxes will end up arriving about 5 weeks too late this year, which means we will have to house 20,000 snowmen in temporary packaging until the correct boxes arrive so we can store them. This means moving Carl twice instead of once = more labor costs and buying temporary packaging that we won't use. 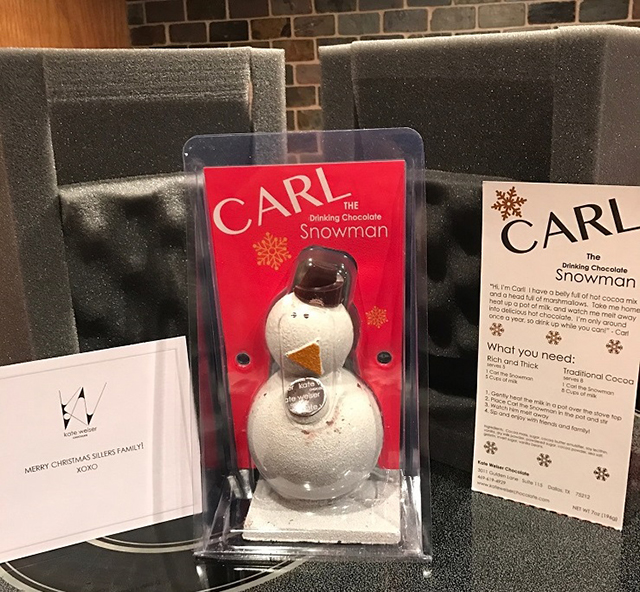 Since the trade war began with China, I've been diligently working on transferring my packaging away from Chinese manufacturers to domestic. Carl will be my only packaging purchased overseas this year. It was a stressful and tedious process that resulted in completely running out of 6 piece boxes for about a month last year.

3) We know that shipping Carl the Snowman is a big challenge - what changes have you made to shipping this year?

We also invested in much better shipping technology for Carl this year. I've been working with a shipping specialist from ADE, Inc over the past 4-5 months developing a new method to get Carl safely from A to B. The guys at ADE have been wonderful to work with and have come up with genius ideas to keep Carl safe.

They created a suspension package so the Carl box is suspended inside the shipping box, thus removing vibrations and getting knocked around. It's working brilliantly and I can't wait to test it on a large scale this year. This new shipping box is easier for my crew to assemble and has a much higher success rate, not to mention it's also less expensive than last year's method.

4) Oprah named Carl the Snowman one of her Favorite Things for 2018. How did that impact production and shipping for the holiday season last year?

Oprah's Favorite Things list was a wild ride last year. I had no idea what to expect so I just went full steam ahead, increasing bonbon production by x 3 and increasing Carl production by x 5. We thought that traffic would drive all of our products up in sales, but the reality was that mostly just our Carl the Snowman sales were affected.

Needless to say, we had A LOT of bonbons leftover after Christmas. I also went into panic mode when it came to hiring. I doubled my staff - DOUBLED! There were nearly 50 seasonal employees at one time on top of my regular 35-40 staffers. It was an intense burst of growth. There were days where it took 20 people in a huge shipping assembly line just to get all of the packages out the door for the day!

I expected the level of sales to continue growing moving forward but I learned that after Christmas was over, we pretty much went back down to a normal level of sales. We ended up being able to sell off all our extra product during Valentine's Day, so thankfully we did not have any waste, but it was a very close call. 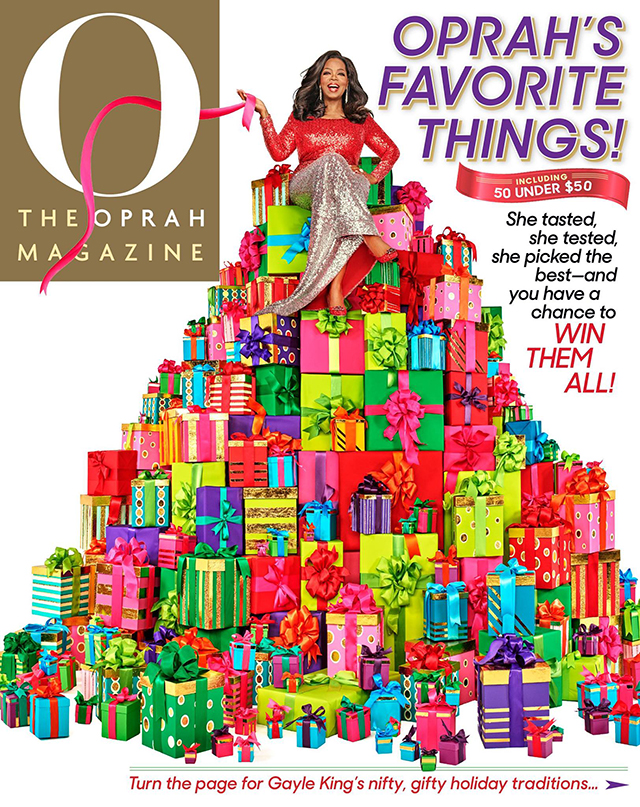 To make Oprah's list, you are required to sell on Amazon. Oprah has partnered with Amazon to provide customers a super easy way to shop the entire list in one go. It was a new portal that we had to learn and it was someone's full time job during that time. Overall I had a good experience with Amazon - we drop-shipped all the Amazon orders out of our facility to better protect Carl. We sold about 8,000 Carls through Amazon last year during Christmas and there were a few times that we sold out during the process. We plan on using Amazon again as a place to sell our products, but don't expect nearly that same turn out since we will not be on the list this year.

All in all, this silly little snowman takes up the majority of my brain for the majority of the year. My hope for Carl is that we continue to make improvements every year by increasing efficiency so we can get more Carls out into the world each holiday season. Carl the Snowman has been my biggest love (and my biggest headache), the best learning experience and my favorite challenge these past 5 years.

We want to say a huge thank you to Kate for so generously sharing her knowledge about producing and shipping her beloved Carl.

If you haven't had a chance to read the first blog post, be sure to read it! You'll see how far Carl has evolved in short amount of time. We wish Kate and her team the very best for another successful Carl season!

Have you got your Carl the Snowman yet? You can get yours here

Want to learn more about making delicious chocolates and confections? Check out our Professional Chocolatier Program!