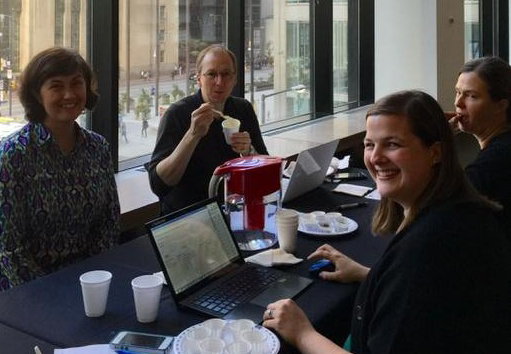 Ever wondered what it’s like to judge a chocolate competition?

At the end of September, I had the privilege of judging the Canadian competition of the International Chocolate Awards in Toronto. These awards play an important role in providing recognition to the Canadian chocolatiers and chocolate makers who are creating high quality chocolate. The awards acknowledge their efforts and talents, and also help consumers understand the value and quality of fine chocolate, including why it’s more expensive than mass market chocolate you can pick up at the grocery or drug store.All entries are presented to the judges anonymously.  First came the selection round, which occurs before the official judging. The selection round is when all of the entries are tasted by a panel of judges looking for fatal flaws that would eliminate an entrant from the judging. In the chocolate world, this could include poor tempering, cracked shells, leaking fillings, or just simply a chocolate that is unpleasant to eat. This year, the awards were fortunate enough to receive over 70 entries to the Canadian competition.

Even without knowing the identity of the entrants, I left that day incredibly impressed with the quality of the chocolate being produced in Canada. Some of my industry colleagues had said that in the early years of the Canadian competition, more than half of the entries didn’t make it past the selection round because the quality simply wasn’t there. Clearly, that is no longer the case as chocolatiers and chocolate makers demonstrate the talent that exists in Canada.

The chocolate bars and bonbons that I tasted were both delicious and in many cases, works of edible art. There were innovative flavor combinations, textures and presentation. However I also left with a bit of a chocolate hangover from all the sugar and caffeine, which I can tell you felt similar to a hangover from alcohol, except instead of feeling mellow, I felt jittery.  But it was well worth it! And fortunately I recovered to be a part of the formal judging panel the next day.

Formal judging begins with each judge acclimating their palates by tasting three plain chocolate bars and jotting down the various flavour notes they detect – cherry, blueberry, citrus fruits, chocolate, cocoa, earthy etc. This process also serve as a “palate check” throughout the judging to ensure that your sense of taste isn’t changing because you’ve eaten multiple pieces of chocolate. 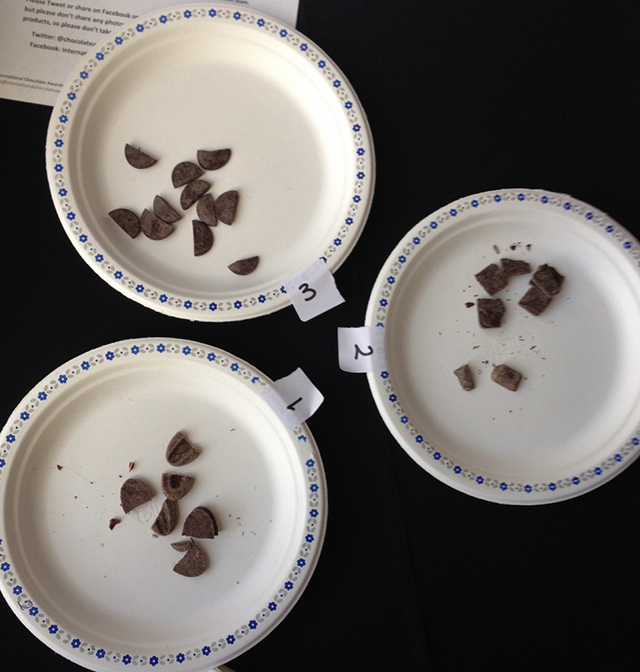 Acclimating our palates before official judging

Judges are asked to re-taste these chocolates after every few rounds to ensure that the flavors notes they tasted are still coming through. I definitely noticed over time that the bright, fruity flavours of one bar began to fade a bit as I tasted more chocolate.

Judging occurs in silence (which can be challenging when you taste something really delicious, something inventive that you’re not quite sure about, or something that maybe needs some further tweaking), with each judge working through the samples in a given category, and electronically scoring the entries based on a number of categories including execution (craft/technique), formulation (ingredients/recipe), interpretation (style, creativity) and taste. Full information about the judging systems and forms can be found here.

Judges are encouraged to post on social media, but are not permitted to take any photographs that might identify the entrants in any way.  And so we got down to the important task at hand, but you’ll have to forgive the lack of beautiful chocolate imagery!

As I thought about what visuals I MIGHT be able to use to paint a picture of this process, I was reminded of a similar challenge I faced in my previous professional life. I worked at a not for profit that was involved in granting research funding. The grant review process was such an important one to help the organization realize its mission, but for the communications team, it was always a challenge to portray. Essentially, it was a group of people sitting around a table with the computers in front of them having a conversation. Not the stuff of super exciting photography. And the judging for the International Chocolate Awards looks much the same, with the exception of people eating chocolate of course! 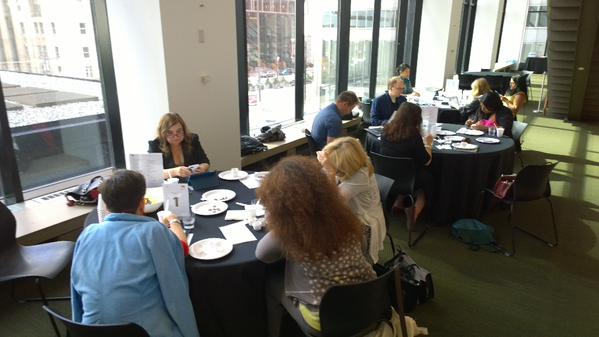 The winners have just been announced, you can find the full list here. I’m pleased for all of the Canadian chocolatiers and chocolate makers whose talents where rewarded. Those of us in the chocolate industry hope that these awards will continue to reward high quality craftsmanship and artistry, and continue to raise the profile of fine chocolate in the minds and mouths of the public.

Right now, a panel of judges is gathered in London to judge the World Final, and the winners will be announced on Saturday, October 17, 2015.  I suspect their days too will be filled with lots of fabulous chocolate, and lots of polenta. It will be exciting to hear who the judges have selected to receive this honour! Watch the International Chocolate awards website or follow their social media channels to learn the results of the World Final. You can also find full lists of winners, and some fabulous, award-winning fine chocolate for you to try!

Want to learn more about making delicious chocolates and confections? Check out our Professional Chocolatier Program!